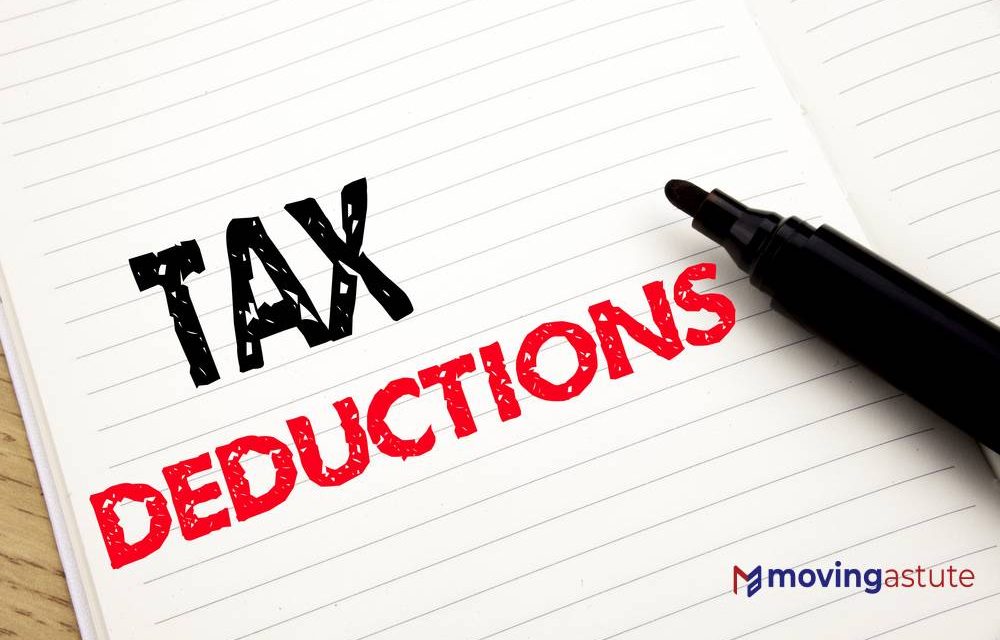 Moving can be a life-changing event and can come with new challenges and learning curves, all of which are exciting to look forward to. We don’t need to list out every task that goes into moving, from deciding on housing to packing and getting your addresses sorted, there’s lots to do!

If you’re someone who is moving for the first time, we’re sure you’ll have a number of questions and doubts, but there’s one that you might not have thought of – can you write off your moving expenses?

You read that correctly! When you’re moving, the expenditure will continue to grow, and have you ever wondered if this amount could be tax-deductible? We’re here to answer this question for you, so keep reading.

The Basics: What Counts As Moving Expenses?

According to the conditions laid down by the IRS, which is the Internal Revenue System, the following counts as reasonable moving expenses:

If you weren’t aware, you are eligible to deduct your travel expenses during your move as well!

What Do Travel Costs Include?

What Do Travel Costs Not Include?

This involves the costs you incur when you’re moving household items and others like packing or crating, in-transit storage, renting a trailer, and insurance. If you’re going to be storing your items at a storage unit, you can apply for tax deductions for that too. However, note that the time span for both storing and insuring your personal effects and household goods should be a maximum of 30 consecutive days. This period of 30 days should fall right after you move from your former home.

Also keep in mind that if you purchase furniture or any other items during your move, you cannot deduct the expenses you incur to move them. Those will have to be borne by you! You can use our Moving Cost Calculator for calculating cost of your move.

Also See: Renting a Storage Unit: Everything That You Need to Know

Which Moving Expenses Are Non Deductible?

While the items we listed above can be given for deduction, there are those that cannot be, according to the IRS. We’ve listed them down below for your reference:

Can You Write Off Your Moving Expenses?

Tax deductions can be carried out for numerous things, but can it really be something you can avail of for moving expenses? Let’s get straight to the point – you cannot, unless you are in the Armed Forces. After the Tax Cuts and Jobs Act of 2017, citizens are no longer eligible to apply for tax deductions for moving expenses, and this rule stays in effect till 2025.

But there’s much more to this than meets the eye, and it might be possible for you to write off your moving expenses if you meet one condition. If you did move before 2018 and never claimed a tax deduction, you can still do that!

However, in order to apply for these tax deductions, you also have to meet two criteria which are the time and distance tests.

The time test is a condition set by the IRS according to which you are required to start employment within 12 months of moving to your new place. The employment period must also be for a span of 39 weeks and should necessarily be undertaken full time.

In order to claim tax deductions on your moving expenses, the distance from your current home and new place of residence are also important. According to rules set by the IRS, this distance must be a minimum of 50 miles. For example, if your new place of employment is only 30 miles from your current home and that’s where you’re moving, it won’t be considered since the distance must be more than 50 miles.

How Does It Work For Those In Active Duty Military?

As we mentioned before, since 2018, only those in the active military can now claim a tax deduction on their moving expenses. If you fall under this category, then you’re in luck! We’ve put together a concise guide for you that you can read through if you’re about to move and would like to file for tax deductions.

Before you apply for tax deductions for your move, consider the following points:

In this scenario, the spouse and dependents of the member in active duty can also claim tax deductions for a move if the member is imprisoned, has deserted, or died. Here, a permanent move or change of address will involve moving to a place where the member was inducted or enlisted. It could also include a location that’s close within the United States and your home of record.

For Those In Active Military Undertaking Foreign Moves

If you’re on active duty and your permanent change of residence is outside the United States, then everything we’ve mentioned above under deductible moving expenses is included. Apart from that, the IRS also considers the following two costs as reasonable:

Note: Moving from a foreign country to the United States does not count as a foreign move and you cannot claim those costs.

Form 3903 is the form military personnel have to fill if you want to claim tax deductions for your moving expenses. We’ll go into the details of what information is required in this form.

The costs you incurred for packing, crating, storage, and the likes are to be written down in Line 1 of the form. You can also include the amount you paid for insurance of your goods in this line. This includes both moves within the United States and moves to foreign countries.

When it comes to storage, in a scenario that you moved a year before you’re claiming for tax deductions or if you just want to claim for the storage costs you incurred while you were outside the United States, do not list them in Line 1 of Form 3903. Instead, write them down next to line 13 in Schedule 1 (Form 1040).

This line can include everything that you spent for travel to your permanent home which can be gas, lodging, and travel. You should also be writing down the amount you spent on the day of your arrival. If your family members are traveling separately, you can include those costs too, but remember that only one person can be included for one trip. This is also where you can put down the money you spent on parking tickets and tolls.

Important Note: For those of you who will fill Form 2555 for Foreign Earned Income, don’t forget to include all of your deductible moving expenses on Form 3903 and Form 1040/1040-SR.

Are Business Moving Expenses Deductible In 2020?

You can either deduct your expenses as moving expenses or business expenses according to the rules stated by the IRS. You cannot take both deductions for the same expenses!

What Deductions Can I Claim Without Itemizing?

You can claim the following expenses without itemizing them:

While the Internal Revenue System had provisions in place for citizens to also claim tax deductions for moving expenses prior to 2018, this isn’t the case anymore, at least till 2025. For this period, only the armed forces can claim these deductions on their income, and if you’re one of them, we hope the above guide gives you a basic idea of how it all works!